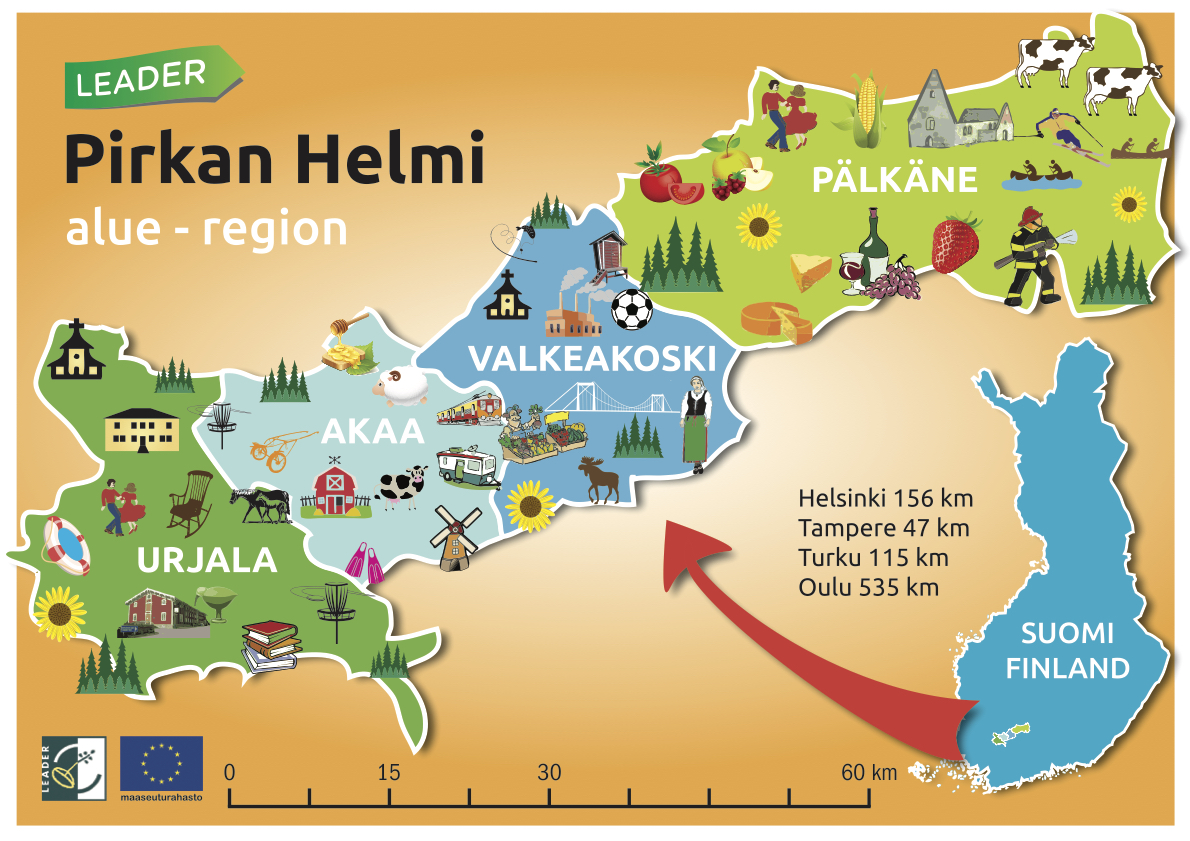 Pirkan Helmi operates in the Southern Tampere Region immediately south of the major city of Tampere. The region itself consists of the towns of Akaa and Valkeakoski and the municipalities of Pälkäne and Urjala.


Pirkan Helmi is one of the 54 local action groups (LAG) implementing the Leader initiative in Finland during EU funding period 2014-2020.

Pirkan Helmi operates in the southern part of Tampere region. The region itself consists’ the towns of Valkeakoski, Akaa, Urjala and Pälkäne. The total area of the region is 1930 km². The region has good connections formed by the Tampere to Helsinki and Tampere to Turku highways, together with the busiest railway line in Finland.

Besides the area’s 50.000 inhabitants there are more than 7.800 holiday homes with their residents in the region.

Close to a half of the region’s inhabitants lives in Valkeakoski and one fourth in Akaa. Akaa and Valkeakoski are growing in population, while the populations of Pälkäne and Urjala is expected to decrease. As a whole, the region of Pirkan Helmi area is growing, but the growth is uneven.

The service sector provides the most opportunities for employment in as is the case in the whole of Finland. However, the share of services is smaller than the average for the entire nation, while the share of industry is bigger. Primary production is somewhat more important on an average than in the whole of Finland. The municipalities have different sources of livelihood: Valkeakoski and Akaa are mainly industrial, while Urjala and Pälkäne are characterized by agriculture.

The strength of Pirkan Helmi is its central location immediately south of the major city of Tampere, and the fact that traffic connections are excellent. Living in the region is cheaper than in the city area, which is a marketing advantage for drawing in new inhabitants. The high unemployment rate in the region is a weak point. The area is also strongly dependant on the existing major industry, and new small enterprises are welcomed. The acquiring of new inhabitants to the region is seen as a possibility. This would lead to new members taking part in the activities of associations. The development of culture and tourism in the region creates possibilities for entrepreneurship, which in turn creates jobs into the countryside. A risk in the future is the ageing of the population, which weakens the economy of the municipalities. The weakening of the economy of the municipalities leads to less services, especially in the countryside.

Pirkan Helmi was founded in 1999 to encourage its rural residents to develop their own home communities, improve its amenities and create new jobs and enterprises. The goal of Pirkan Helmi activities is that the region is a lively and pleasant place to live and work in and it offers good possibilities to spend leisure time and enjoy culture events.

Check out entrepeneurs in this region
Register