Starting from June 2017 Anija Manor Foundation has enjoyed a pleasant experience participating in the SEIC project. We have found new partners and gained exciting and inspirational ideas. The cooperation that has started with our Latvian partners during the SEIC project will definitely not end with the project. On the contrary, the foundation is ready to face new challenges and expand the circle of partners.

On August 12th of 2018 the Festival of Manor Culture took place in the Anija Manor park (with the support of Leader project).
Zanda Zarina from the manor of Lielvircava, Jelgava (also a participant in the SEIC project) who is our partner in this project, participated in the festival.
According to her words Zanda spent wonderful summer days in Anija Manor from 11th to 13th of August 2018, helping us and taking part of the Festival.
On August 11th, arriving at the manor Zanda had a taste of our famous manor rhubarb cake and had a discussion about the difference between the manors in Latvia and Estonia. We also had a common understanding of t he importance of the catering in the manor and how the cafeteria in Anija manor fits perfectly into the manor milieu. Unfortunately, this is not the case in the manor where Zanda is coming from.

On Saturday, preparing for the festival, we set up all the places for traders, signs, etc. needed in the manor park, so that the festival would be successful. Zanda had the pleasure of participating in the preparation. She admitted that something in these proportions has not been organized in Lielvircava. Staying with us, Zanda took part of all the pleasures and worries of conducting the festival. As the weather turned rainy, we had to make quick arrangements and re-organize some things. Durings these arrangements Zanda was a big help to us with her advice and support. The festival day was long and tiring, but at the same time charming and gave a lot of inspiration for the future.
Already on the next day after the festival Zanda had to travel back home.

We plan to visit Zanda in the Lielvircava manor to find out how life in the northern neighbors looks like in the manor. We also definitely want to see and admire Zanda’s work with the 19th century garments, which could also be found on Anija Manor.

We are grateful for the participation in the SEIC project! 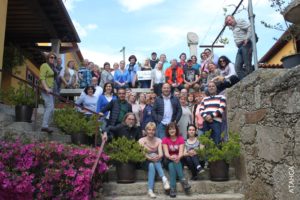